“The best part of my job is to put on the computer in the morning, without knowing which questions to expect. Which puzzles can I solve today?” Demelza van der Lans works at the ZooEasy helpdesk since 2016. But she knows the program for a much longer time: “Many of my friends use ZooEasy. When I picked out my dog, I had contact with a breeder who uses ZooEasy as well. She checked in advance if the dogs in the nest didn’t have to much inbreeding and if the dog meets my wishes.”

If you have a question about ZooEasy Stand Alone or ZooEasy, Demelza is the first to reach: “The questions vary a lot. Most of them are easy to answer, such as question about the activation code. Some people have a complex issue because of a virus on their computer. We puzzle until we have the right solution. And if I can’t find the right answer, I can always count on the knowledge of the developers in our team: Jan Vissinga for ZooEasy and Erik Reudink for Stand Alone.”

ZooEasy is used all over the world. The helpdesk notices this too: “We help breeders in three languages: English, German and Dutch. But sometimes breeders from other countries mail as well, such as Russia or Romenia. English isn’t their first language. Sometimes it’s hard to understand the source of an issue. Then it gets more complicated. I usually solve this by asking more questions and give some examples. Google Translate helps a bit, but isn’t always reliable. We always continue until we find the solution.”

“I also noticed that our customer are very greatful”, says an enthusiastic Demelza. “We had a great example of a breeder who still used Version 1 of ZooEasy. His database was over twenty years old! We imported his database to the newest Version 13 in the first attempt. We were both positively surprised.”

Demelza understands really fast which question breeders want to have answered. “If a breeder talks about health reports and uses terms such as HD (hip dysplasia), they’re glad I know what they talk about.” She knows these terms because she owns several animals herself. She is really proud about Rover. Rover is a Pumi, an Hungarian sheep dog. “We’re herding sheep together. Rover is the first Dutch Pumi with his HWT certificate. He also likes agility training and together we visit mentally impaired people and elderly people. Hungarian sheep dogs are usually oriented on their owner, but we did a lot of socialization training the first two years. Now he has a perfect sense to know what people need on our visits. He does tricks and people can pet him or feed him dog candy. That is really cool. Once we were at a group with a spastic man in a wheelchair. The man didn’t seem to respond, until Rover came. Rover threw the ball at the man’s lap. The man looked at the ball, lifted it and slowly turned it around. Rover watched him and turned too. The man smiled. My dog gets people out of their isolation, because he senses their needs.” 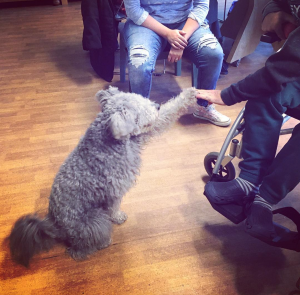 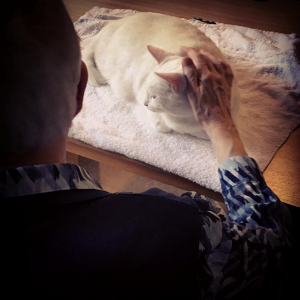 Rover isn’t the only one to visit people who need extra care. “I also have a deaf cat, named Ludwig”, smiles Demelza. “He is very easy. I put him on a lap of an elderly person and they sleep together for half an hour. The animals adjust their behavior to the person whom they interact with.”

Besides her dog and cat she also has two lovebirds. “I used to have budgies in an aviary too. I also know a bit about sheep, because of my training with Rover. My neighbors have a ridin school, so I know some about horses too. I’m learning new things every day. That is useful, because this helps me in better understanding our customers.”

As much as she knows about animals, so versatile is her job experience. “At my own company we take care of the musical input of funerals. Live music, mostly with singing, an organ or a piano. I have studied singing at the Royal Conservatorium in the Netherlands. Most of the time I hire other musicians, but sometimes I sing myself. It’s hard to plan for a funeral, so I appreciate my company is easy to combine with ZooEasy.”

Has Demelza a tip or trick for breeders who want to start with ZooEasy? “Yes, sure! When you add your animals, start with the eldest animals, such as the greatgreagreatgrandparents. It’s easier to add younger animals to the parents. You can do it the other way around, but that takes a bit longer. This tip is useful for both ZooEasy Stand Alone as ZooEasy.”

Do you have any questions for Demelza? Or do you need a hand in using ZooEasy? She and the rest of the team are happy to help you at our helpdesk. 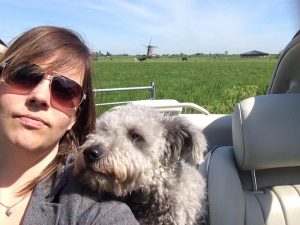